While planning our trip to Prague, we knew we had an ample  time to
ourselves as our friend from Prague couldn’t get as many leaves as
expected, due to the leaves that he had applied while our visas got
rejected. We knew we had to be on our own and had the chance to
explore other places too.

So the brainstorming on which other places should we visit started.
Initially, we finalized on Paris and Vienna, but somewhere down my
memory lane was the beautiful Budapest that I had seen in some movie
which had attracted me a lot and so we decided on Paris and Budapest.
As we would have reached Prague on a weekday we had decided to
start our journey from vibrant and colorful Budapest. In an hour or two of reaching Prague
and freshening up our journey to Budapest started. My friend who
worked in Scotland also accompanied us.

We had decided to self-drive to Budapest so as to enjoy the scenic
countryside. We went to hire a car for the drive, and that is when we
realized that the cars there have left-hand drives. OOPS!!! None of us
four ever had the experience to drive a Left-hand drive car.
Finally, my friend from Scotland decided to take that risk and we booked a Skoda (being a
home brand there we got a good deal, €1200 of deposit inclusive of just
€200 rent).

we left for Budapest at 4 p.m.
My friend started driving at a speed of 40kmph to get a hand on the left
hand drive. He drove like that for around 30-40kms gradually increasing
his speed till he was confident enough to drive at a normal speed. It

seemed we were creating our own version of ‘Dil Chahta Hai’ and
‘Zindagi Na Milegi Dobara’. From playing all lovely Bollywood numbers
to singing as loudly as to get swollen Vocal chords, from video calling all
our friends settled in different countries to make them feel jealous of
the reunion, from stopping and clicking snaps of the countryside to
leaving them behind and letting them chase our car for nearly a
Kilometer.

It is this 7 hr drive from Prague to Budapest that made me aware that
all the countries between these two accepted three currencies viz. their
local currencies, The Czech Koruna and as all of these fall under
European Union also The Euro. And the most annoying part is that they
decide their own exchange rate.

While driving we booked Pal’s Hostel online. The parking slots in
Budapest are free from only 8 a.m. to 8 p.m. and for the rest of the time,
we need to buy a parking spot. So we bought a parking spot near our
stay for Euro 40 for two nights.
We reached Hostel at midnight and we really did not want to miss the
first day of trip sleeping, though having a tiresome journey we decided
to hit the floors and asked the manager at the hostel to suggest a good
pub. He told us the Budapest is really famous for its Ruin Bars located
at the Budapest’s old District VII neighborhood.

Ruin Bars:
We had never heard of a Ruin Bar until we had visited one. They are tiny
looking houses from outside but step in and they are a whole new

world inside. It’s hard to understand how a tiny looking ramshackle
house from outside can turn into a beautiful artistic bar with old-fashioned
furniture serving wonderful drinks and playing lovely
numbers not too loud so as to disturb the neighbors. Ruin Bars were
meant to be underground bars but not all of those are underground
these days. They are located in the Jewish Quarters.

The Walking Tour:
Though coming back by 5 in the morning we decided to join the FREE
WALKING TOUR from St. Stephen Basilica which is the center point
from where most of the tours start. We were lucky enough to be
staying just opposite the place from where the tour started. Most of
the European Cities do have free walking tours that cover most of the
important sightseeing points along with a good historical overview.
Walking Tours are highly recommended.
While on the tour we realized that Budapest isn’t one city but are three
cities the BUDA and the PEST and the OBUDA divided by the Denube
River and connected by the Chain Bridge which was joined and made
one city in the 19th century. It was earlier called ‘PESTBUDA’. Both of
these cities though made one still have distinct identities. Budapest is
so underrated, especially when you think of how many historical sites it
is home to.

Buda Side:
Buda is the more classy side of the city. It has more residential
complexes. It is the quieter part of the city where one can enjoy more
scenic and serene sightseeing. Unlike Pest that has more affordable
housing, Buda is home to the Elite. It is where you would find the most

expensive houses and the cars. It is more culturally beautiful. It is said
when Buda sleeps Pest wakes up.

PEST SIDE:
We lived on the beautiful and the happening Pest side. It is more
vibrant with the bustling nightlife, basically the party side of the city.
You get to have the best food here as the city’s best restaurants are
located on this side.

OBUDA SIDE:
Obuda was a City in Hungary which got merged with the Budapest in
1873 and now forms the District III Obuda Bekasmegyer of Budapest.
The name means Old Buda in Hungarian. Just next to it is the Obuda
An island that host the Sziget Festival which is a huge music and cultural
festival. The Main Square of the city (Fo ter) is connected to a small
square which has this beautiful sculpture of people waiting for the rain
to stop.

Jewish Quarters:
Just outside the city walls of Pest lies the Jewish Quarters. The place
that now hosts a number of Ruin bars was actually inhibited by the
Jews. You can learn about the atrocities of the Holocaust and the Budapest
Ghetto (A Nazi set up to forcibly relocate the Jews by a decree of the
Hungarian Government). It was surrounded by a high fence and a stone
wall so that people could not get out. A small section of this wall
(that now exist in the courtyard of a building on Kiraly Street) was
rebuilt from some of the originally used bricks. A great combination of
Yellow star houses with quirky design shops, the beautiful ruin bars
and the 3 Synagogues (one of which is Dohany Synagogues which is the largest in Europe and the second largest in the world), this place is must visit both in the day and also when the night falls. 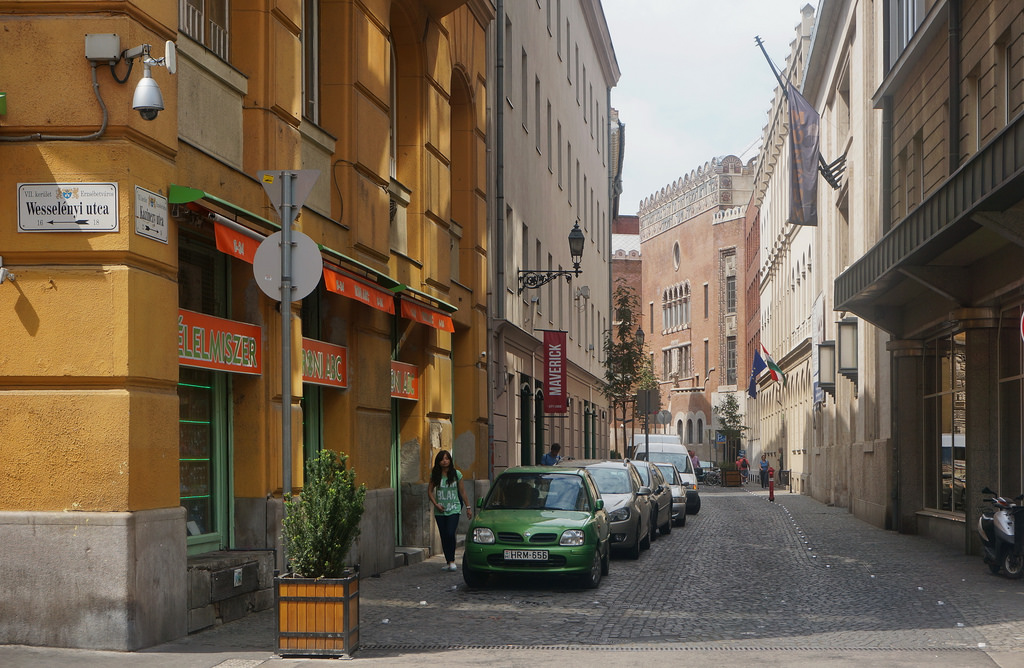 The New York Palace Budapest:
Also known as the ‘Boscolo Budapest’ is a luxury hotel of the Budapest
which houses the famous ‘The New York Café’ on its ground floor. It
was the most loved and elegant coffee house of the 20th century,
frequently visited by the writers and the editors. The most influential
newspapers were being edited at the gallery upstairs. After the World
War II, it went into a bad shape and was converted into a sporting
goods shop. The Café was reopened in 1954 with the name ‘Hungaria’
but it was until 2006 that the New York Café was restored to its original
splendor. The Palace built in eclectic Italian Renaissance style houses
the café along with the restaurant and the Nyugat-bar. They serve a
varied multicultural cuisine of the Austro-Hungarian Monarchy.

Budapest City Park:
It is one of the oldest parks in the world. The park includes beautiful
and must visit places like 1. Budapest Zoo 2. Municipal Circus 3. Gundel
Restaurant 4. Budapest Circus Building 5. Szechenyi thermal bath and
also 6. Vajdahunyad Castle that is the replica of the Transylvanian
castle.

Thermal Baths:
It is said your visit to Budapest is incomplete without taking a thermal
bath. Budapest is home to thousands of naturally warm spring water that
are known for its medicinal values. There are several of these Thermal
baths that have been there for centuries. People prefer the Turkish
baths that are located on the Danube River but it is said that even

before the Turks, the warm waters have even been enjoyed by the
early rulers like the Romans and the Celts. Although there are
numerous such baths, the most famous and the most preferred is the
Szechenyi thermal bath. And surprisingly they are cheap too.

Shoes on the Danube Bank:
Located on the Pest side, this is the place that would leave us horrified
with the atrocities of the Holocaust. The metal shoes were built to pay
homage to those who had lost their lives during the mass shooting
during 1944-45 (They were forced to strip naked facing the river and
had fallen into the Danube River). People put flowers in the shoes and
lit candles in the remembrance. 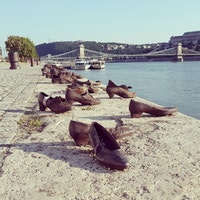 Hungarian Parliament:
The tallest building in the Budapest lies on the banks of Denube. It is
considered as the 3 rd largest parliament building in the world. Its
magnificent structure would surely make you fall in love with it. It has a
very limited visiting hour (to be specific only a quarter of an hour) and
that to when the assembly is not in session. We were lucky enough to
take a gaze at it. 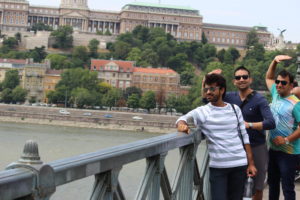 St. Stephen Basilica:
Almost as tall as the Hungarian Parliament, St. Stephen Basilica is better known
as ‘The Basilica’, dedicated to the 1 st king of Hungary is the
largest church in Hungary. It is the place where the Szent Jobb (The
Holy Hand) rests. It is the mummified right hand of St. Stephen. One
can also enjoy a 360° Panorama view of the city from ‘The Cupola’.
There are a number of lovely terraced cafes at the Stephen Square. A
truly must visit. 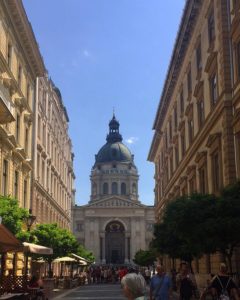 Fisherman’s Bastion:
For all of those Disney princess’ lovers, this is the place to be. These
lookout towers’ walls are made to give a more fairytale castle of the
Disney’s feeling. They offer Panoramic viewing towers that overlook the
Danube river and the whole of the city. Its seven turrets represent the
seven Hungarian tribes. There is a beautiful café on the terrace too. 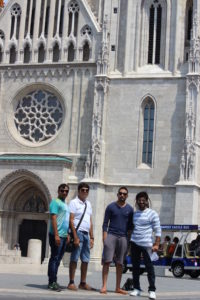 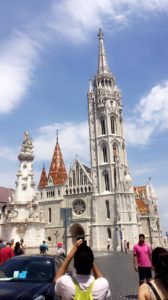 Buda Castle:
Located on the Castle Hill and built in the 13th century, it is a castle and
a palace complex of the Hungarian kings. It is also known as ‘The Royal
Palace’ or ‘The Royal Castle’. It has now been converted into the
Hungarian National Gallery and the Budapest History Museum. It is a
few minutes walk from the Fisherman’s Bastion.

Night Cruise:
The city turns a lot more pretty and happening as soon as the sun starts
setting. A night cruise at the Danube River is highly recommended.

Budget : 2 night 3 days in Budapest will cost you around 300 dollars
excluding flight and shopping. ( Including food, accommodation and
sites visit ) 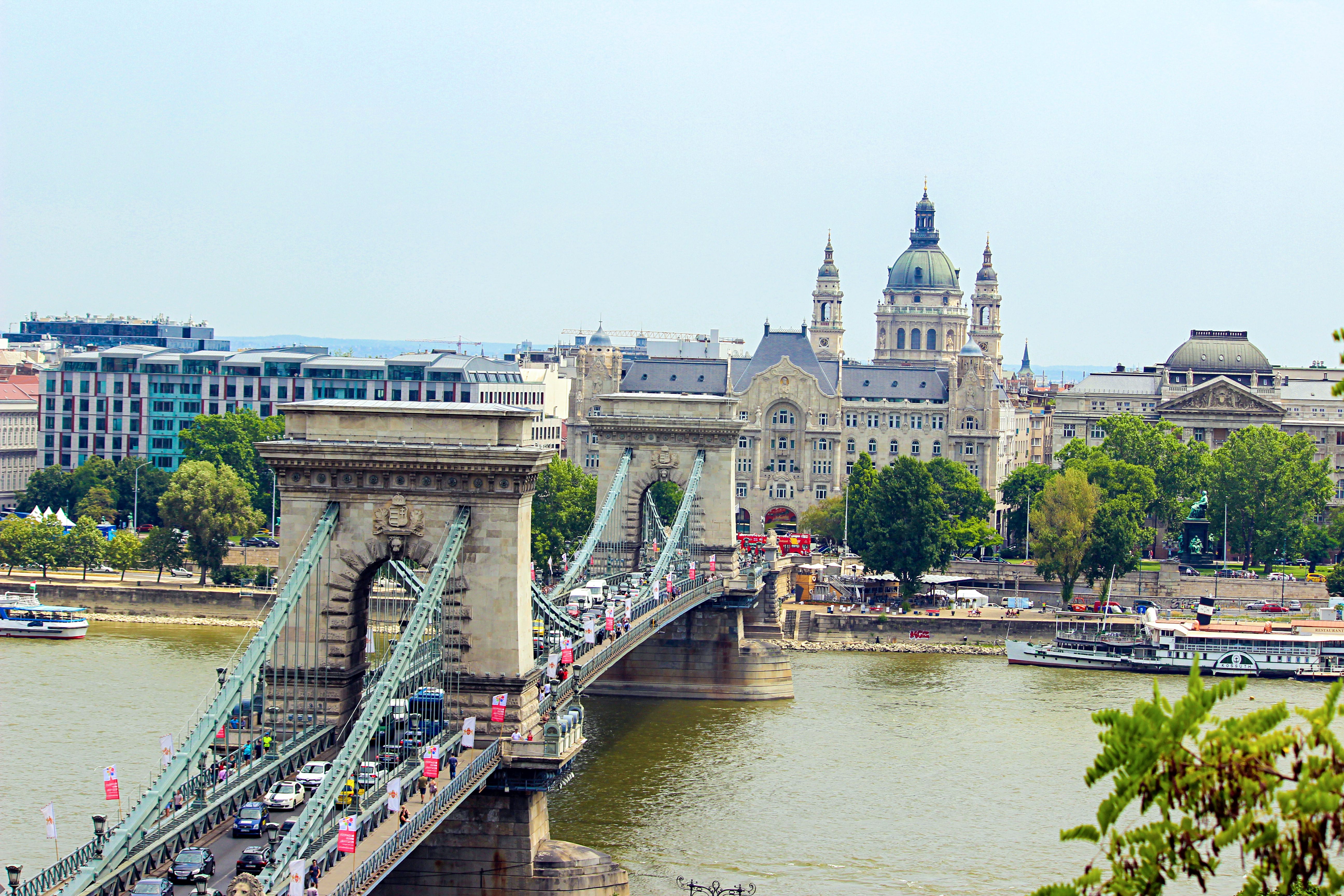 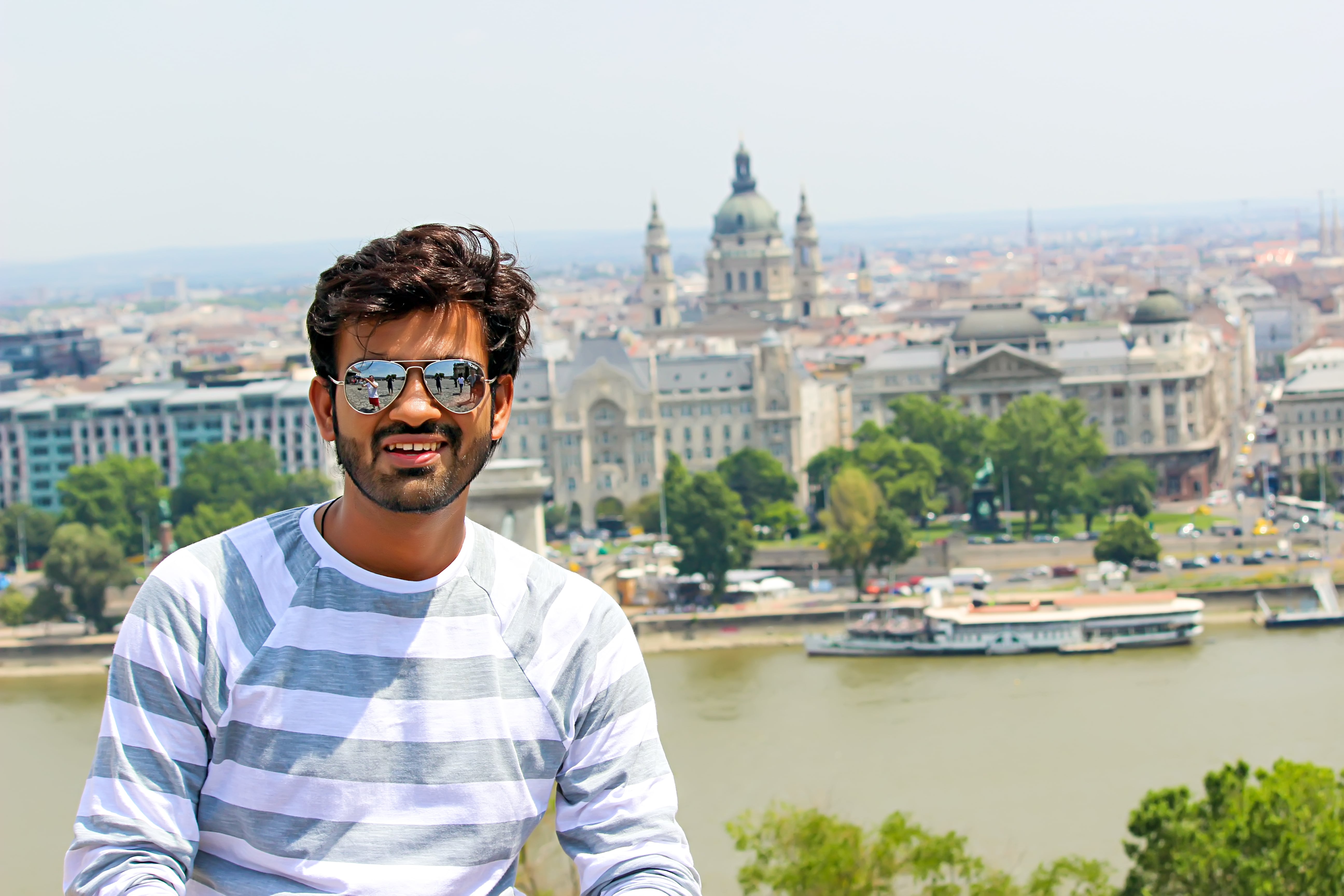 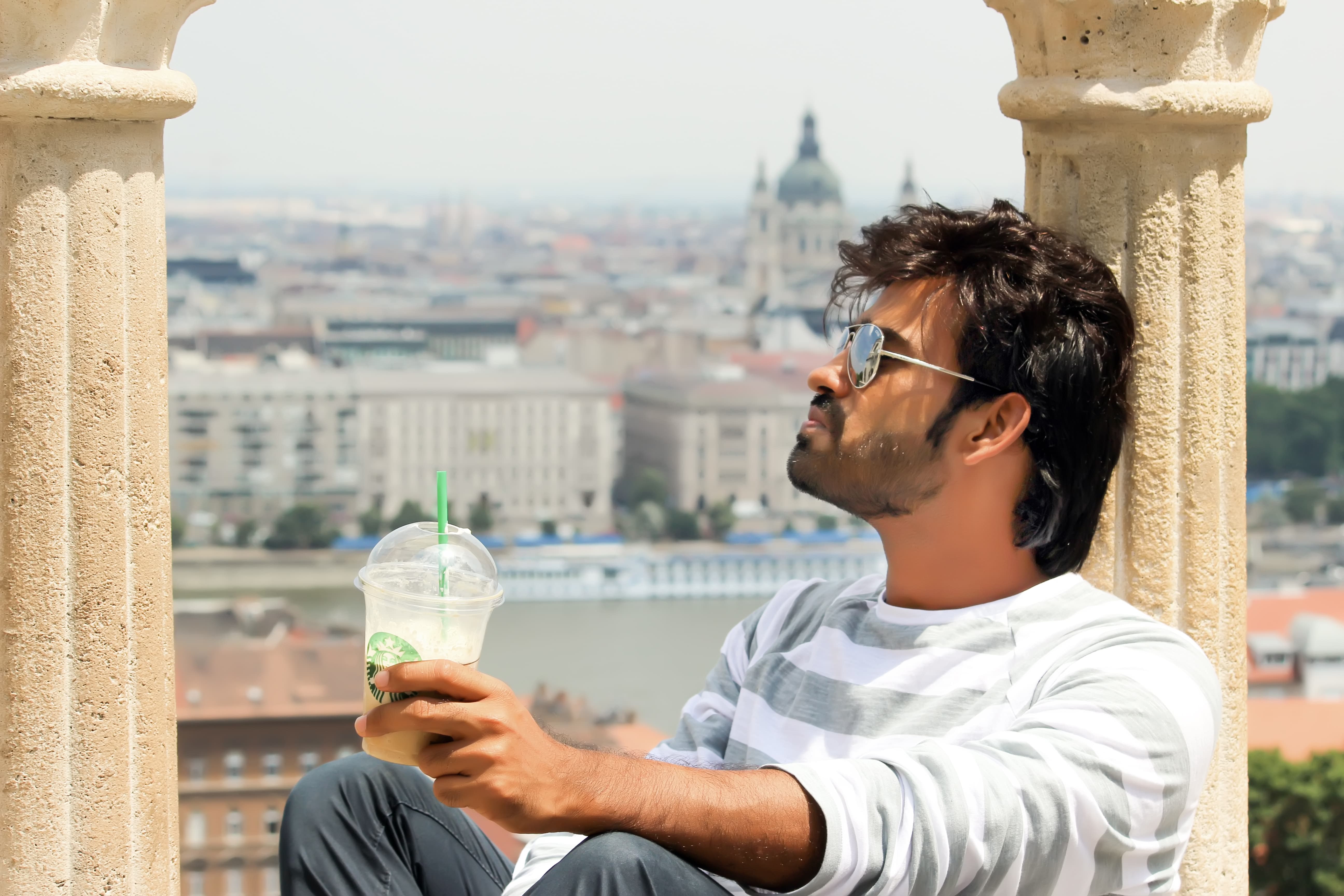 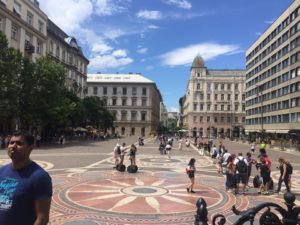