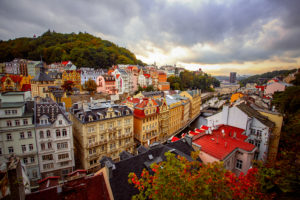 So was our trip to KARLOVY VARY the Spa Capital of the world– Unplanned and Awesome. Usually, when you don’t plan a trip, it brings in a lot of excitement and is most of the time the best of the holidays as you wouldn’t have expected much out of it.

When in Prague, our friend with whom we were staying was supposed to take us around the city and the vicinity. But, as the fate had it, due to some workload, he couldn’t manage a leave from his office at the last moment and we were left to our own for a day.

Now, we had two options, either we stay back and relax or roam around by ourselves. The traveler in me insisted on the later and I was successful enough to convince my friends. That is when I suggested going to Berlin, the capital of Germany. I so wanted to visit that place from the start. But, Berlin is approximately 3 hours drive from Prague, which would make 6 hours of the drive only. With just a day in hand, we had to be quick and had to decide a place that wasn’t too far, yet interesting. That is when my friend suggested KARLOVY VARY, which is at 130 km and would take just 1 ½ hour. He advised us to catch a Subway.

Tourists hardly know about KARLOVY VARY better known as CARLSBAD, and for the matter of fact, I had n’t ever heard about it. KARLOVY VARY which means “Charles’ Bath” was named after the Holy Roman Emperor Charles IV, the King of Bohemia who found it in the year 1370. It is a small Spa Town on the west of Bohemia, the Czech Republic set on the confluence of the rivers Ohré and Teplá. It is famous for its hot springs with around 13 main springs and about 300 smaller springs along with the warm water of Teplá. There are more than 200 spa houses in this beautiful valley which have these medically beneficent hot springs.

As suggested by our friend we reached the bus station only to find that even the last bus to Karlovy Vary was jam-packed due to the ‘KARLOVY VARY FILM FESTIVAL’ going on. As the event was very famous and huge there was a lot of rush and there were practically no seats available. Though there are train services running from Prague to Karlovy Vary, the most preferred mode of transport is the bus. We stood there sad and disheartened with the thought that though unknowingly, but we couldn’t witness such a big event. It is then that an employee from ‘Student Agency’ came running to us and informed us of the additional bus services they had arranged for the rush and inquired if we were interested. Finally, we got our seats. ‘Student Agency’ runs hourly buses from Prague to Karlovy Vary and the 1 ½ – 2 hr bus run costed us 155Koruna.

Europe has mesmerizing countryside. The whole journey connected me to my childhood. The scenery that I saw in the cartoons and fairy tales as a child was in front of me making me fall in love with the place all over again. The huge bus window seemed to be my TV screen and  I was watching something so splendid that forced me not to leave my dreamland. Small lakes covered with greenery, beautiful mountains, windmills on hills, and wooden houses in lush green farms, all seemed too dreamy to me. 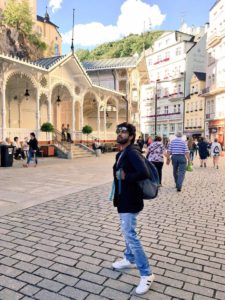 Finally, we reached Karlovy Vary. The ongoing event ‘Karlovy Vary Film Festival’ was located at 1.5 km from the bus stop. Excited, we rushed to the spot. The air was filled with amazing vibrations. We were lucky enough to spot a lot of Hollywood stars. We started taking snaps and went around the place. Amidst all these excitements, suddenly, we were cornered by two policemen and asked for our passports. After demanding a reason for the same, we were informed it to be for some security reason. It is then that we realised that there were hardly any Asians apart from us and that might have created some doubts. After checking our passports and knowing that we were Indians, they not only apologised and let us go but also suggested us with some Indian Restaurants for meals. 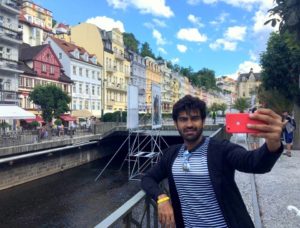 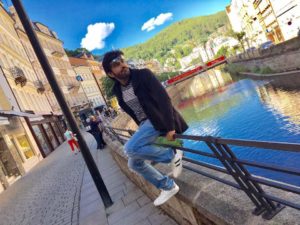 We left the festival to explore the beautiful town. There are few must-see places to visit in Karlovy Vary or probably the ones I loved:

This traditional symbol of the town is a long sequence of columns connecting several hot springs. It has two aisles with around 124 Corinthian columns. There are 12 statues representing 12 months of the year that sit above the Portico. There is also a raised Orchestra space for the spa orchestra which plays regular, free concerts.

The Hot spring Colonnade built in 1975 located in the heart of the spa area houses the richest and the warmest spring in Karlovy Vary that shoots around 2,000 liters of mineral water into the air at a height of up to 12 meters every minute. The geyser of Vřídlo gushing to a height of almost 12 meters is a unique natural phenomenon that has become the symbol of the spa. As the thermal water is too hot for many patients, it is distributed into 5 bowls in which it is cooled to a temperature of 50°C and 30°C in order to be suitable for the drinking cure. The hot spring water from the underground colonnade is supplied to the spa hotels for them to use it for both bathing and drinking cures. One section of this underground colonnade is open for the tourists.

Get mesmerised by the magical world where Moser Crystal was born and discover its 160-year-old rich history of Moser Glassworks. You also get to experience the master glassmakers transforming a glowing mass of glass, taken from a furnace at a temperature of 1300°C, into the shape they desire and how they blow the glass and shape it in wooden moulds. There is also a shopping gallery that exhibits the oldest to the latest collections. 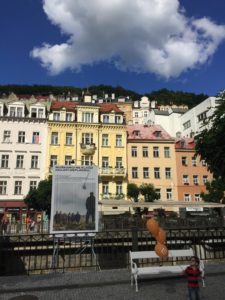 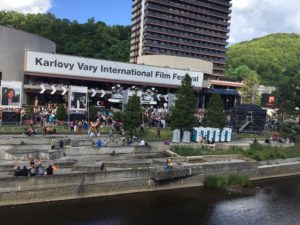 While hiking through the thick woods two local hikers Cutler Václav Drumm and Chronicler August Leopold Stöhr accidentally discovered this beautiful Friendship hill with such magnificent view of the whole spa town in around the 19th Century. Soon after the discovery, this beautiful brick tower with a wooden roof was constructed all equipped with modern amenities like lifts. A nature admirer like me would have loved to hike the forest trail but that would have taken us around an hour and a half. But, having the time constraint, we chose the other way to reach there that is by funicular (kind of rail used for steep paths), which runs every 15 minutes from the Grandhotel Pupp. The entry there is free except for the month of January.

There is a beautiful forest terrace Diana restaurant that offers awesome food and view. From above you can be lucky enough to find amazing wildlife like peacocks, ponies, goats. Also, there is a Butterfly House that is a tropical garden with beautiful butterflies all around the globe.

Although there are various other places to visit, we had limited time in our hand and so had to finally bid adieu to this beautiful European town and head back to Prague. I left with a promise to myself to come back and spend some more time here next time. 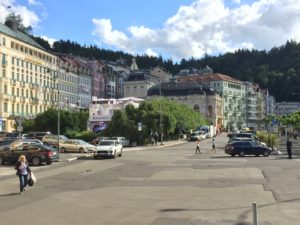 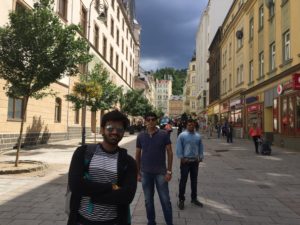 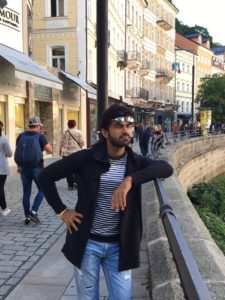 mate your site is really cool, but it has a poor Domain Authority
sad truth is that sites with poor Domain Authority won’t rank high in Google and in result get very little of traffic
I had the same problem in the past and my website didn’t rank high in Google
I searched for a professional who would help me with it; found one guy who really helped me rank higher in Google and increase my Domain Authority to 58! I’m super happy with this score
Contact him: https://janzac.com/contact-janzac/ (his prices are very reasonable for the service he provides)

Thank you. Provide me with the number.